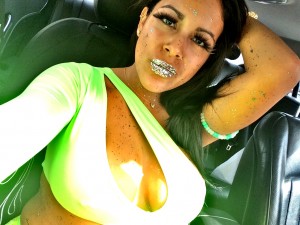 Name: Ingrid Diaz
Other Names: Ninastacks11
Birthday:  January 25th, 1994
Physical Description:  Brunette, 5’0″ tall, large breasts
Location: Orlando, Florida and Miami, Florida
Email: ingriddiaz94@hotmail.com
A man met Ingrid online and she sent him the pic above. They went out twice but then he found out she was doing drugs so he stopped seeing her.
Update January 2016:
Another man says he met Ingrid online and she sent him the same pic. He says she was advertising on Backpage.com as an escort and the pic was old because she had gained a lot of weight.  Our software says it was taken with an iPhone in 2014