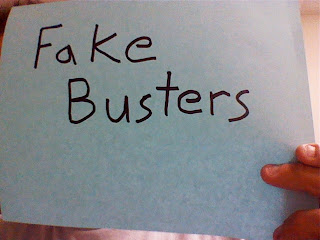 A few months ago we had a guy write and tell us about how he busted fakes and players. When they would write him he would reply asking them to send a picture of them holding up a sign that included a specific phrase like “Hello Heath, I am Becky.” He didn’t ask for a dirty pic, just one of their face with the sign.

He explained that a woman who was willing to do that showed that she was a real woman, her pics were of her and she was willing to make an effort. With everyone having a camera on their cell phone the only time he got excuses or the women refused to send a pic like that was when the woman later turned out to be really overweight or a player of some sort.

We didn’t think anything of it because it sounded like a good idea but who would go through all that trouble? Since then we have received several emails from other suggesting the same way to detect spammers and fakes.

So we tried it and it is really simple. And if someone is interested, why wouldn’t they take that small step to show they are real and interested?

After we took the picture above we realized that a pic with just words could be used by someone else. Someone could create an account and call themselves “Jane Smith” or “Fake Busters”

Because email addresses can’t be recycled we suggest everyone takes a pic of themselves holding up a sign with their email address on it instead.