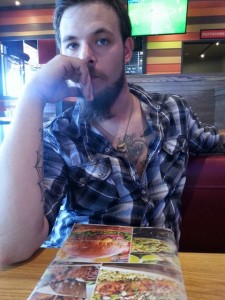 Review: I was married to this scum for over a year and a half. He cheated on me several times with different girls who he said were his friends. I forgave him because he had a lot mentally wrong with him. His adoptive mother totally screwed him over (and she still does). I finally had enough of it, he rather have slept with random girls and beat it to random strangers rather than be intimate with me. I guess his girlfriend took it out of him. But she is pretty heavy, so I imagine it’s a workout moving her around. When I told him I wanted a divorce he begged me to stay. He wanted me and only me. Blah blah blah, I imagine his girlfriend had no idea he begged me to stay. But I stayed strong. Instead of going to court and filling it under Adultery, we filled under mutual agreement. We weren’t legally separated and he went all on his Facebook about how he’s now a step daddy of 3 kids and with his new 30 year old scum. When he still had pictures of me on there. I mean a huge step up right? I was a Hooters Girl in Indiana (I now live in California) still early 20’s, and he got a mid 30 year old hag. WOO he totally wins. Now she has him and I
have my freedom. I wish her luck with him. But I hope they get pregnant, so she can suck all his money out of him.

One Reply to “Is Jeffrey Michael Matenaer a cheater?”