A man met Debbie on the Feeld app which is an app for people to meet and have sex. Screenshots of the messages she Debbie told the man that she was married but her husband was unable to get an erection. She was looking for younger men to have sex with and she would pay him. Debbie wouldn’t give him her phone number but she gave him her kik information instead and the man went to the place the were supposed to meet. Debbie never showed up though or responded to his messages.

Do you think Debbie is a fake or a cheater? Do you have any other information about her? Leave a comment below? 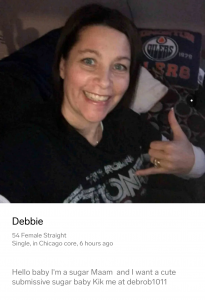