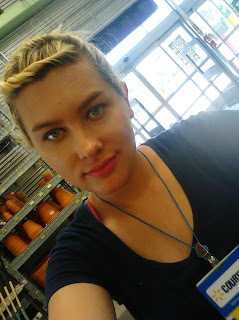 Have you ever seen the website peopleofwalmart.com? We have to say, Courtney is one of the most attractive Wal-Mart employees we have ever seen. And that could be why we have had two different men send us reviewsof her.

Originally she was on the possible player list because we saw emails that showed she lied to a guy and led him on. She gets her own mention because we got a second report from a guy that had actually dated her and suspected she was cheating or just using him. Anyone out there know anything about Courtney Wuilleumier?

Update: Someone claiming to be Courtney contacted us and claimed that another person had stolen her identity and she had never done the things reported. We did some checking and contacted the two men that reported her.

The man who claims Courtney had cheated said that she was attached to her phone and never put it down. That her phone was a Droid Razr 4G and he thought she used Verizon. The other guy said he had wasted enough time on her and he just wanted to warn people about her.

When we responded to Courtney and asked for some clarification she never responded.